Vancouver, British Columbia, October 24, 2022 – Optimum Ventures Ltd. (“Optimum” or the “Company“) (TSXV: OPV), is pleased to announce the start of drilling at its Harry Project located within the Golden Triangle near Stewart, BC. The Harry Project is situated within a 200 kilometre (“km”) long northwest trending corridor hosting numerous high-grade gold occurrences and discoveries. It is just 30 km southwest of the Eskay Creek Mine and strategically located between Ascot Resources Ltd.’s Premier Mine and Newcrest Mining’s Brucejack Mine.

Sunbeam Drilling has commenced operations utilizing a B-15 drill running NQ core and a JK Smit helicopter portable drill using BTW core. This season’s program is planned to test several new zones discovered earlier this year during prospecting, mapping and, in some instances, Shaw shallow surface drilling. Priority is being given to the Swann, BR, Ursula, Ursula South, Saw Cut, and GS zones, where to date over 1000 surface talus fines, chip samples, grab samples, saw cut samples and Shaw drill core has been sent for assay. Some early results were released by the Company on September 22, 2022, indicating gold and silver values occur in every zone. Additional assay results will be released as available.

The initial drilling campaign is planned and financed for 2,500 metres (“m”) and is scheduled to test these multiple zones of gold-silver bearing poly-metallic sulphide mineralization where surface prospecting coupled with surface exposure Shaw drilling has established multiple prospective targets for follow-up drilling.

The Saw Cut zone outcrops and has been exposed over a strike length of 40 metres. Sampling along its exposed length in shallow Shaw drill core returned sulphide mineralization consisting of pyrrhotite, galena, sphalerite, chalcopyrite, and pyrite in semi-massive to massive veins, stringers, and interstitials within brecciated zones and/or disseminated throughout the core. The zone is hosted in mudstone, dacite tuff and mudstone supported dacite lapilli-tuff which contain from 1 to 30% pyrite, locally trace to 8% sphalerite and trace to minor galena. Three grab samples collected from the zone were submitted for gold and silver assaying at Seacan Labs based in Stewart, BC. The samples returned up to 5.40 g/t gold and 156.4 g/t silver. Geological data gathered to date indicates that the Saw Cut zone belongs to a gold-silver enriched volcanogenic massive sulphide (VMS) type of mineralization like that of the famous Eskay Creek deposit located just 30 km north of the Harry project. Drilling using the B-15 diamond drill has commenced on the Saw Cut zone where a four drill hole program is just being completed. Observations of the core indicate sections of semi massive sulphides. On completion of drilling at Saw Cut, the drill will immediately be moved to the BR zone. 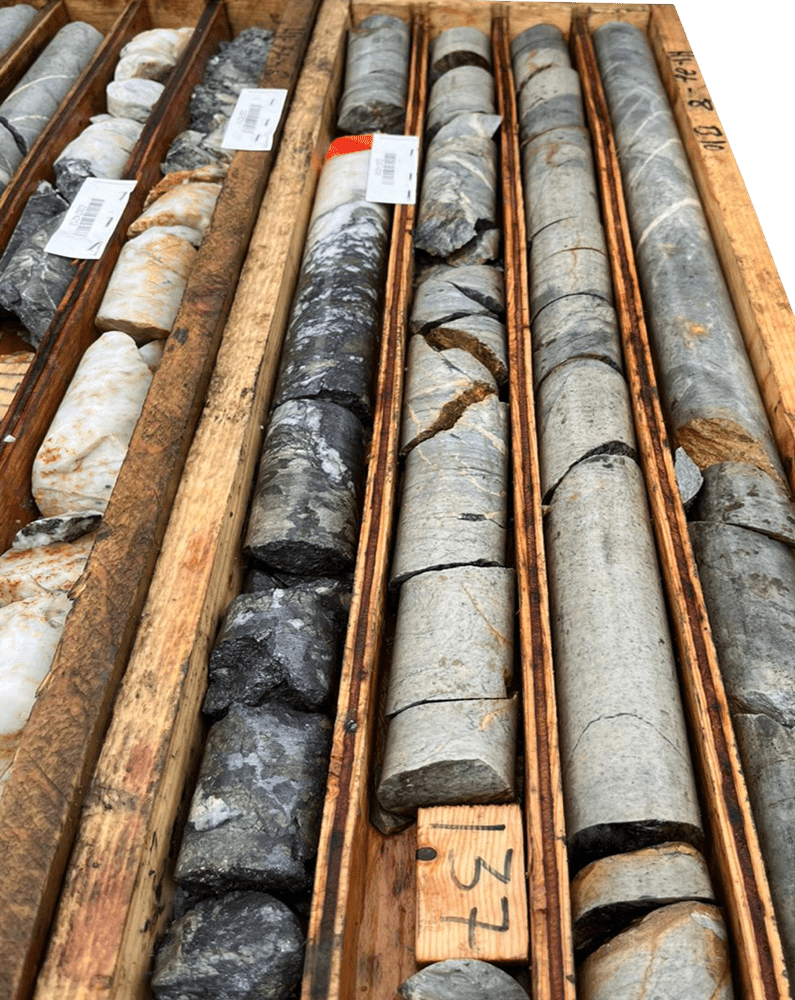 The JK Smit drill was mobilized to the Swann zone where two holes have now been drilled of a planned four hole program. Surface work indicates the Swann zone is exposed up to 40 metres wide at surface. Mineralization in the zone shows similarities to Eskay Creek-type mineralized structures where footwall and veins had disseminations of dominantly sphalerite-galena-tetrahedrite-pyrite with minor amounts of chalcopyrite. Previous drill results (see press release: 2022-04-20) intersected the Swann zone returned the following results:

* Stated lengths in meters are downhole core lengths and not true widths.

More recently, crews have exposed parts of the Swann zone in an area of deep overburden where the current drilling is aiming to expand the strike of the zone.

The BR is a zone of massive galena with minor sphalerite veinlets in a stockwork. Discovered while prospecting the Swann zone, it appears to run parallel to and is approximately 100m east and uphill from the Swann zone. Prior sampling on the BR returned values from 1.8 to 26.6 grams per tonne gold and 282.9 to 1,003.2 g/t silver in five samples from the zone. The zone’s relationship to the Swann is hoped to be determined by this year’s drilling.

Optimum Ventures Ltd. is a Canadian based mineral exploration company actively seeking opportunities in the resource sector. Its properties and projects are all located in British Columbia and the extensions of the “Golden Triangle” area of northern British Columbia into Alaska. The company has an option agreement with Teuton Resources Corp. pursuant to which Teuton has agreed to grant to Optimum the option to acquire an up to 80-per-cent interest in the Harry and Outland Silver Bar properties, located near Stewart, B.C. For more information
visit www.optimumventures.ca.

Mr. Edward Kruchkowski P.Geo., a member of the Company’s Board of Directors and registered in the Provinces of British Columbia is the “Qualified Person” under NI 43-101 and is responsible for the technical contents of this news release and has approved the disclosure of the technical information contained herein.

Certain statements contained in this press release constitute forward-looking information. These statements relate to future events or future performance. Forward-looking statements include estimates and statements that describe the Company’s future plans, objectives or goals, including words to the effect that the Company or management expects a stated condition or result to occur. The use of any of the words “could”, “intend”, “expect”, “believe”, “will”, “projected”, “estimated” and similar expressions and statements relating to matters that are not historical facts are intended to identify forward-looking information and are based on the Company’s current belief or assumptions as to the outcome and timing of such future events including, among others, assumptions about future prices of gold, silver, and other metal prices, currency exchange rates and interest rates, favourable operating conditions, political stability, obtaining government approvals and financing on time, obtaining renewals for existing licenses and permits and obtaining required licenses and permits, labour stability, stability in market conditions, the impact of the COVID-19 pandemic, availability of equipment, availability of drill rigs, and anticipated costs and expenditures. The Company cautions that all forward-looking statements are inherently uncertain, and that actual performance may be affected by a number of material factors, many of which are beyond the Company’s control. Such factors include, among other things: risks and uncertainties relating to Optimum’s ability to complete all payments and expenditures required under the Option Agreement; and other risks and uncertainties relating to the actual results of current exploration activities, the uncertainty of reserve and resources estimates; the uncertainty of estimates and projections in relation to production, costs and expenses; risks relating to grade and continuity of mineral deposits; the possibility that future exploration, development or mining results will not be consistent with adjacent properties and the Company’s expectations; operational risks and hazards inherent with the business of mining (including environmental accidents and hazards, industrial accidents, equipment breakdown, unusual or unexpected geological or structural formations, cave-ins, flooding and severe weather); metal price fluctuations; environmental and regulatory requirements; availability of permits, failure to convert estimated mineral resources to reserves, the inability to complete a feasibility study which recommends a production decision, the preliminary nature of metallurgical test results, fluctuating gold prices, possibility of equipment breakdowns and delays, exploration cost overruns, availability of capital and financing, general economic, political risks, market or business conditions, regulatory changes, timeliness of government or regulatory approvals and other risks involved in the mineral exploration and development industry, and those risks set out in the filings on SEDAR made by the Company with securities regulators. Although the Company believes that the assumptions and factors used in preparing the forward-looking information in this news release are reasonable, undue reliance should not be placed on such information, which only applies as of the date of this news release, and no assurance can be given that such events will occur in the disclosed time frames or at all. The Company expressly disclaims any intention or obligation to update or revise any forward-looking statements whether as a result of new information, future events or otherwise, other than as required by applicable securities legislation.

Vancouver, British Columbia – December 20, 2019: Optimum Ventures Ltd. (the “Company”) is pleased to announce that it has completed its initial public offering (“IPO”) in which it distributed 4,255,000 common shares of the Company at a price of $0.15 per common share for aggregate gross proceeds of $638,250. The Company’s common shares were listed…

Vancouver, British Columbia – June 30, 2021 – Optimum Ventures Ltd. (“Optimum Ventures” or the “Company”) (TSXV:OPV), is pleased to announce that it has closed its previously announced nonbrokered private placement of units of the Company (the “Units”) pursuant to which the Company issued 11,538,191 Units at a price of $0.26 per Unit (the “Offering…

Vancouver, British Columbia – November 25, 2022 – Optimum Ventures Ltd. (“Optimum” or the “Company”) (TSXV:OPV), is pleased to announce that the Company has entered into a share exchange agreement dated November 24, 2022 (the “Agreement”) with all of the shareholders of 1309762 B.C. Ltd. (the “Vendor”), a privately held corporation incorporated under the laws…

Vancouver, British Columbia –August 18, 2022 – Optimum Ventures Ltd. (“Optimum” or the “Company“) (TSXV: OPV) is pleased to report several new zones of mineralization on the Company’s Harry property located in the Golden Triangle in NW British Columbia. Recent mapping has indicated a sequence of volcanic rocks in the NE portion of the claim block…

Vancouver, British Columbia  September 27, 2022 – Optimum Ventures Ltd. (“Optimum” or the “Company”) (TSXV: OPV) announces that the Company has received the gold and silver assays for select samples from BR, Usrula and Golden Summit zones located on the Harry property. Highlights of the sampling include: 1.8 to 26.6 g/t Au and 282.9 to 1003.2…

Vancouver, British Columbia – August 3, 2022 – Optimum Ventures Ltd. (“Optimum” or the “Company“) (TSXV:OPV), is pleased to report the start of exploration on the Harry property located in the prolific Golden Triangle, 30 km northwest of Stewart, BC. Building on the success of last year’s drilling, Optimum has begun surface exploration work on…

Exploration of High-Grade Gold in the Prolific Golden Triangle

Our newsletter provides corporate updates straight to your inbox.